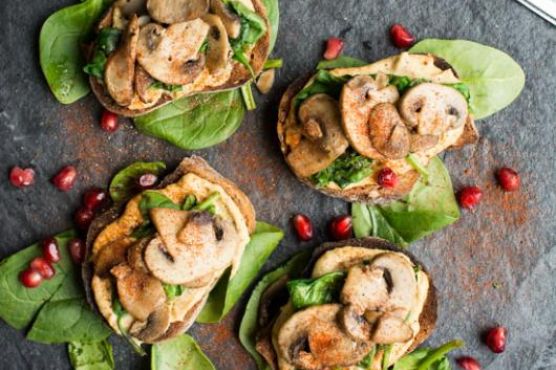 The recipe Mushroom Hummus Crostini can be made in about 30 minutes. For $2.41 per serving, this recipe covers 31% of your daily requirements of vitamins and minerals. One serving contains 468 calories, 21g of protein, and 10g of fat. This recipe serves 4. 1 person were impressed by this recipe. It works well as a rather inexpensive hor d’oeuvre. A mixture of lemon juice, hummus, hummus, and a handful of other ingredients are all it takes to make this recipe so scrumptious. It is a good option if you’re following a dairy free, lacto ovo vegetarian, and vegan diet. It is brought to you by Foodista. This recipe is typical of Mediterranean cuisine. All things considered, we decided this recipe deserves a spoonacular score of 89%. This score is super. If you like this recipe, take a look at these similar recipes: Hummus And Cucumber Crostini, Seared Tuna with Hummus on Crostini, and Beet Hummus and Caramelized Onion Crostini.